Okay, so, since I’ve had so many inquiries about my apple activities, I’m going to try my best to make a little mini-unit with them.  It will be random, but I’d love to share!
ETA 9/19/14 : All activities up to this point are uploaded in the resource pictured below.  Click the pic to check it out! Here’s what we did today…
We started off getting our applesauce ready to go!  Fortunately, B didn’t have to go into work until later, so he peeled all the apples for me!  #lovethatguy  While he was doing that, Becks and I read Apple Picking Time by Michele Slawson.  I loooooooove this book.  It tells a great story and the pictures are so sweet.  A great read-aloud. Then, it was time to make applesauce!  Becks read the recipe and measured out the ingredients before mixing everything together.  {Our recipe came from The First Grade Parade >>> HERE} We turned the crock pot on and went about our day.
Today we were thrilled to do some science, starting with Cara’s The Great Apple Investigation.  Becks LOVED this, and while he was doing it, he looked at me and asked if I would home school him again.  Melt. My. Heart.  I sure hope to continue!
The investigation included tons of opportunities for observation and collecting information about his apple.  Afterwards, we used his cut up apple (plus another) to do apple prints with paint. It didn’t take him long to pretend each apple was a member of Lego Ninjago, and then this resulted from all the spinjitsu stunts they do…
OY. All the while, little sis watched on.  I can’t tell you how much these two love each other.  They both light up when they’re together.  She can’t wait to run around with him, I just know it! In the spirit of exploration, Becks was curious if he’d be able to clean the paint off the apple.   It was a good effort 😉 Then, we had a lunch break and it was time for a little Sad Apple Science.  You all.  Isn’t he the most pitiful thing?!  I kinda want to hug him… When I explained what we were going to do to the apple, Beck wasn’t very amused at first.  I don’t want to hurt the apple, mom!!!!!  But, alas, it was for the sake of science, so with a little encouragement, he was game.  And, if it makes you feel any better, there was no harm done to the apple pictured above.
First, Becks had to fill out his little observation sheet to hypothesize what he thought would happen when the apple was dropped.  Naturally, he thought it would EXPLODE.  Because he is a six-year-old boy and all.  Then, it was time to drop the apple.  FUN. TIMES. I love how he wrote “squishy part” and “bruise.”  Invented spelling at its best 😉
But, we didn’t stop there.  The last part of the experiment was to see what happens when a bruised apple is exposed to banana!  Pictured above, you see the banana and apple on one set of shelves and the apple all by itself on the other set of shelves.  And, I assure you Becks made sure that both apples were substantially bruised.  {According to science, the banana will expedite the chemical process by emitting a gas that will produce a more pronounced bruise on an already bruised apple!  Cool, huh?!}  We’ll keep you posted on our results!
Lastly, we continued our study of facts and opinions and ate a big ol’ caramel apple.  First, we used our 5 senses to observe the caramel apple.  Then, of course, he ate it to see how it sounded and tasted.  Afterwards, we did a shared pen activity and wrote sentences about our caramel apple.  We reread the sentences and underlined the facts and opinions in different colors… Not gonna lie, it was about this point that I lost him!  It was a struggle to finish the activity!!! By the time we were finished, the applesauce was ready for eatin’!  And, the moment Becks went outside, I poured a steaming hot helping over top of Graeter’s Salted Caramel ice cream and called it a day 🙂 Happy Thursday!  I’ll try my best to get the unit uploaded by tomorrow! 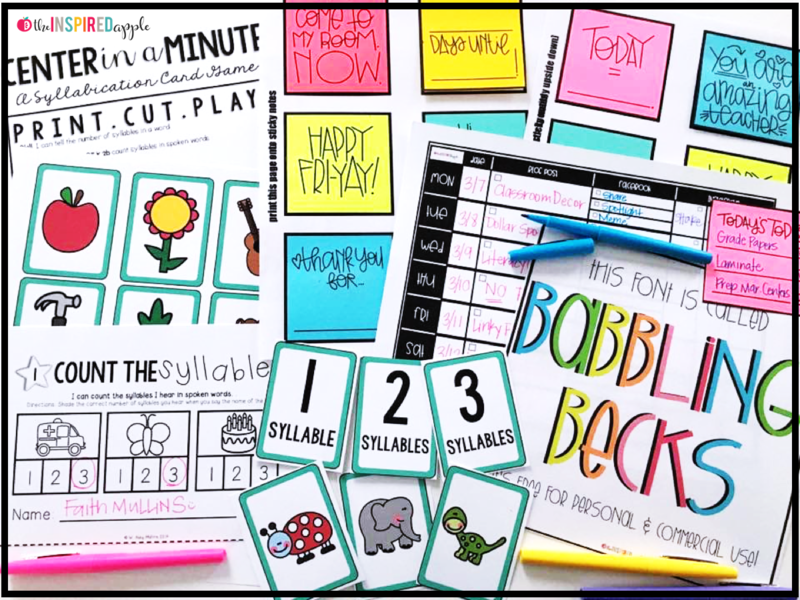